Remember when I was telling you that I’m gonna die some day? Well, you should know that that was the first day for me as a vegetarian! And I’ve been a vegetarian ever since. More precisely, a lacto-fisho-vege-tarian. Initially, in the first month I was only eating vegetables, milk (and milk-stuff) and from time to time some fish (maybe once a week). After four weeks, I counted only 5-6 meals in which I had actually eat some form of meet (pork, beef or chicken).

I was in Hawaii when I encountered the first dizzy feeling. But we had a really f*cked up schedule over there, eating like 10 fruit pieces for breakfast, and grabbing a really fast veggie lunch on the fly. And we were swimming like the whole day, 5-6 hours straight. Anyway it did concerned me a little bit. I prefer dying at 40 killed by a heart attack than dying at 27 in a motorcycle crash because I got dizzy at 200km/h :))

So, I started paying more attention to what I eat. I started eating more fish, like 2-3 times a week because I needed the proteins. After one month it was the first time my body was running out of proteins, (which are an important fuel to the muscles) so I was expecting muscle pain especially when doing sport. But besides some weakness, I didn’t feel any of these symptoms. Anyway, after 1 month I went back to my doctor, who was really impressed by my will of doing this. He gave me a key-advice: I can get my proteins from any kind of nuts. Even if they have some vegetable fat, they still provide me with a lot of proteins, at a much lower cost (in cholesterol) than meet. Ah, I simply love pistachios, almonds, walnuts and hazelnuts, so I’m pretty happy with this!

And I should also mention that I lost 3.5 kg in one month by eating more than I usually did. The doctor warned my about that. It’s impossible not to loose weight if you become a veggie. Being a vegetarian makes me eat more, because the freakin vegetables disappear from my stomach like no other! In the middle of the day I’m like: „Duude, where did you gooo? I starving again, I ‘m sick of starviing. Where’s an apple? Where’s the apple? Gimme an apple! Aapppleeee!!! (running through the building)” 🙂 Well my PM colleagues got used to the fact that they can always find some goodies and healthy snacks in my office after a hard day’s work. So they always stop by, hunting for a peanut or a fruit.

So here I am! 7 weeks later I started to feel better again. I don’t feel weak anymore, and I think my body is getting used to the new diet, and the new (smaller) volume of proteins and fat. Anyway, I do feel a lot more energic, since I get like a hundred million vitamins from the ton of daily vegetables and fruits that I eat.  Oh yeah! And I did learn how to cook for myself. I learned how to enjoy preparing a daily salad with some shrimps or smth, or cooking some salmon in the oven, with olive oil and tomatoes. (Thank you Elena for that – I really value your guidance and training! 😀 )

Oh yes, I forgot to tell you that the first time I bought some raw salmon to cook, I took it home and then realized I have absolutely NO dish to cook in. Except the pan I used for omelette before :)) So I had to go back to the store and buy some freakin cooking dishes.

Well, unfortunately even though life is beautiful when you eat the same food as the cow does, some things have changed again in my diet. I had a session with a dietician, and I just found out that the salmon has the same amount of cholesterol as the chicken, and shrimps are way above that.

These being said, I have to also let go of the fish (or reduce to maybe once a week) and eat more beans, soy and rice (brown, cooked). This way I won’t starve between meals since these aliments release the energy slower in my body. And I have to change the way I eat my breakfast: I need a bigger and more consistent breakfast, so I bought a weird kind of oat cereals, that I have to cook for a few minutes before breakfast. Yeah, oat means „ovaz, in mm…”. :)) I will try this and I’ll tell you how it goes. Anyway don’t get me wrong. I am really exited to try all these, because I hope I can improve my lifestyle this way.

Plus, the biggest advantage as a veggie? Whenever you are hungry, you can get a pretty satisfying meal by „resolving” an apple and a banana. And that’s it! If you’re a veggie you get used to eating small meals. So there you go: Put a banana, an apple and a punch of nuts in your bag and you just cooked a fast, on-the-fly lunch for yourself! 😛 Or, let me put it this way: When you’re hungry, you look at an apple and say: „That’s some pretty good shit!” 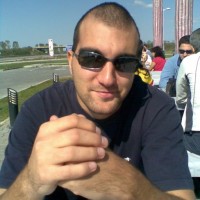